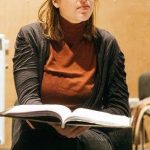 London is renowned for its multi-culturalism, it’s an aspect of the city that makes it great. Immigration is an element of society that has had a great focus placed on it, and mainly for the wrong reasons. Director Katharina Reinthaller discusses directing Cecilia Gragnani’s Diary of an Expat, a show inspired by Cecilia’s own story of leaving Italy to pursue a new life in the UK.

Diary of an Expat will be performed at this year’s Edinburgh Fringe Festival from 2-26thAug. How are you feeling ahead of the show?

As always with the Fringe (it’s my fourth year) I feel a mix of excitement and anxiousness. Especially the week before – have we organised everything? How will audiences respond? Where are my wellies?

I feel very proud of the show itself – I think Cecilia and I have made a show that is touching, thought-provoking and funny. I’m really looking forward to bringing it to Underbelly and hopefully to many more exciting venues after!

The show is very timely; a one woman show looking at the experiences faced by Italian migrant Cecilia. What was it about the project that made you want to get involved?

For me, anything theatre and performance related needs to always respond to its surroundings and the contemporary socio-political environment. Whether that is an existing text where you might need to ask: What does it tell us today? or new material, doesn’t matter.  When Cecilia approached me with the idea for the show about a year ago I immediately thought ‘Yes, we need this now!’.  Maybe it was also because I feel very much connected to the topic, being a migrant, expat, immigrant myself.

Written by Cecilia Gragnani, Diary of an Expat draws on her experiences. How have you both worked together to bring the show to life?

I have worked on many (semi) autobiographical shows in the past years (Labels, Whiskey Tango Foxtrot, Normal/Madness) and it is a delicate approach, as there are more personal experiences, memories and fears involved. I tend to ask the writers/performers lots of questions – Where are we? What do you want the audience to feel? What’s the journey of the character? Then we workshop ideas and see where it takes us.

It was important to both of us to have lots of humour in the show and take things with a pinch of salt – being European migrants we are in a very privileged position and we wanted to make that very clear.

They will make friends with a sausage roll, they should be prepared for their next Pub Quiz and they may even meet the Queen!

I hope audiences will better understand the impact that Brexit has on individual lives, what it means to live in another country, the loneliness and the Happiness. Hopefully we have a diverse audience, where some people might have similar experiences to Cecilia and some might not. Bringing different people together to engage in discussion is what I always aim for with my work.

Could you describe the rehearsal process for the show?

At the beginning of rehearsals we worked a lot on the text, be it anything from writing new passages to editing. We needed to establish the storyline and explore what it was exactly we wanted to say. There is always too much material for an hour long show!

In the further rehearsal process we used a technique called under-reading, which is particularly useful for solo shows – one person reads the script and the performer repeats the text whilst walking around the room.  There are different ways to do this, but it helps to grasp the dynamic and rhythm of the text before beginning to think about movement. Then we spent some time creating the different characters that Cecilia plays and, of course, there are lots of meetings with the sound, lighting and set designers.

Know why you want to make work, who with and who for.  Try to get into rehearsal rooms to assist. Learn about other aspects of theatre – acting, producing, lighting.  Read.  Go see lots of theatre, big and small scale, abroad, in a language you don’t understand. Travel. Make work – even if it is with friends, students, once a year – direct!

Diary of an Expat will be shown at Underbelly – Cowgate as part of this year’s Edinburgh Fringe Festival from Thursday 2nd until Sunday 26th August 2018. For more information on the production, visit here…