The National Health Service and Alan Bennett are two of Britain’s most loved treasures. Only last month did the NHS reach the grand age of 70 years, and it’s the celebration of ageing that frames Bennett’s new play at the Bridge theatre. 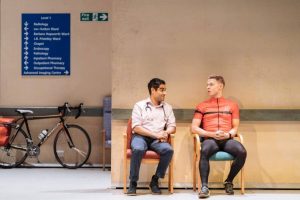 Unsurprisingly directed by Nicholas Hytner, Alleluja! welcomes us through the doors of the geriatric ward of the much loved, if not a little behind, Bethlehem Hospital where ‘yesterday is the new tomorrow’. ‘The Beth’ as it’s colloquially called by its flock of Yorkshire visitors, is under the threat of closure unless the health minister decides not to pull the plug on his own constituency’s cradle-to-grave institution.

Luckily for the Beth, the health minister’s consultant  Colin (Samuel Barnett) has travelled back home from London to visit his elderly father Joe (Jeff Rale) who is receiving treatment for an infection in the camply named ‘Shirley Bassey’ ward of the hospital. Joe is joined by a whole host of golden oldies who sing, dance and talk about everything from nostalgia to sex.

Though these patients seem to be having the time of their lives, and the nurses in Allelujah! seem to have far less on their plate than any NHS nurse could ever image, there’s a much darker secret lurking behind the steely exterior of Sister Gilchrist (skilfully mastered by Deborah Findlay).  As time goes by, and the search for a free bed gets harder and harder, questions arise about the practices  that are going on behind closed doors at the Beth, and things are obviously not all what they seem.

Findlay handles the character with ease and recites her final monologue with that gorgeously wry delivery that makes Bennett’s work so deliciously moreish. With 50 years’ experience under his belt, it’s understandable why Bennett takes the lead as one of the greatest writers of female characters the UK has to offer.

Bennett’s message is loud and clear, immigrants are propping up our NHS and London city slickers just want to privatise it all for their own profit. Colin is the archetype Thatcherite doing whatever he can to close the very hospital that is treating his father, which contrasts Dr. Valentine’s (Sacha Dhawan) happy-go-lucky ‘nobody can be quite written off’ mantra. But it’s the lack of nuance in these characters and their speeches that makes the more politically charged monologues somewhat nauseating.

The heavy dollops of clichés that are ladled out are a tad unsophisticated, like the delinquent work experience boy (David Moorst) who lolls about and Colin’s gay guy returning back home to homophobic father shtick feels hackneyed and outdated.

A few cogs in Allelujah! don’t feel as watertight as you’d hope to expect. Something in this piece yearns to be spread out into a BBC 2 dark comedy series where the subtleties can be cultivated properly, rather than mashed together in a twoand half hour show. Bennett’s twinkling charm certainly does strike again, but Allelujah! definitely isn’t his best work. 3/5

Allelujah! is currently showing until Saturday 29th September 2018 at The Bridge Theatre. To find out more about the production, visit here…