In three hours three extraordinary actors perform three acts. Ben Power’s magnificent adaptation of Stefano Massini’s epic novel follows the story of a family that made the one of the biggest impacts in America’s history. That same nation is still feeling the consequences of the brother’s actions today. 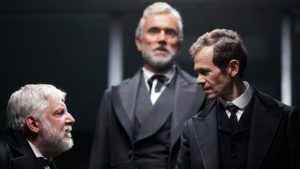 Arguably one of the most exciting directors currently working, Sam Mendes brings a beautiful flair to this expertly created production. His 180-minute story compels right from the start and takes you on an overwhelming exploration of family, power and capitalism. Beautifully put on the Lyttleton Stage, this monumental piece deserves lots of high praise.

Simon Russel Beale’s Henry transitions to Alabama in the hope of securing a place in the cotton trade. Naïve to the world, what he lacks in business knowledge is made up for in tenacious spirit. Years later he is joined by siblings Mayer (Adam Godley) and Emanuel (Ben Miles), and together the three of them open up a small fabric business.

This is impressive enough but it doesn’t stop there – not even close. America’s economy booms and cotton becomes a fruitful venture. The Lehman Brothers capitalise on the trend, quickly becoming one of the most lucrative businesses in the country – for so many years to come. Their endeavours pass through the end of slavery, The Great Depression and two World Wars.

What was the secret to their success? The family possessed quick thinking attitudes, a desire to better their lives and an innate skill to hustle their way through everything. It’s the true American dream. Their journey is full of risk, and daunting undertakings, culminating in prosperous results.

Mendes’ production draws out beautiful performances from the three actors, who multirole different ages and genders throughout the story. There’s a real versatility to each of them and a beautiful rawness to each delivery. It’s an incredibly special thing to see.

Brilliant acting, gorgeous set design and rigorous attention to detail make this a fantastic night out. 5/5

The Lehman Trilogy is currently showing until Saturday 20th October at the National Theatre. To find out more about the production, visit here…