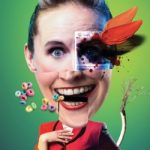 We now find ourselves living in a world whereby having an online presence can prove powerful. A single image or headline can travel the lengths and breadths of the world in a matter of minutes. Traditional news outlets perhaps not the first point of call when finding out the latest headlines, independent publications are now finding that their voices are proving very influential. Renowned for their exploration of timely topics through physical theatre and puppetry, Theatre Témoin return to the Edinburgh Fringe Festival to showcase their latest project, Feed, exploring this new digital world we find ourselves living in. Contributing playwright Eve Leigh tells us more about the company’s current piece.

Feed will be performed at this year’s Edinburgh Fringe Festival from the 3rd to 27th Aug. How are you feeling ahead of the show?

Really excited! It’s been wonderful to collaborate with artists from such different backgrounds and from so many different parts of the world. That’s what Theatre Témoin do best.

Feed explores a new age of media – an age whereby a single image can circulate across the world in a matter of seconds. How have you found being a part of this project?

It’s been really thought-provoking. One of the problems storytellers are facing when talking about this stuff is that we in the West have such a strong rhetorical tradition of good vs bad. This isn’t really a scenario in which that applies. Finding the right form, which accommodates nuanced thought and vivid drama, has been challenging.

Fellow contributing playwright Erin Judge and yourself have been aided by dramaturg Chris Thorpe to create the final show. What has been the process for crafting the show?

Well, for me it’s been very much one of phases. Chris and I started by doing a workshop with Ailin and some wonderful young people at the Lowry, and then as he was less available there were further periods of character and script development with Ailin, the cast, and me. In the final stage, as my availability shifted, it’s been very much a process of handing over to Ailin, Erin, and the performers.

I would like to somehow lower the temperature of the internet.

Theatre Témoin are renowned for exploring complex issues in a visually unique manner. How have you collaborated with the company to realise their vision?

As we developed the narratives, it was very much a question of asking ourselves what different, fun physical textures were going to define the different spaces in which the story takes place. That was new to me, and really exciting.

Ask yourself what excites you and develop your own taste. That’s how you begin to make distinctive work.

Feed is currently showing at the Pleasance Dome as part of this year’s Edinburgh Fringe Festival until Monday 27th August 2018. For more information on the production, visit here…