Akua Gyamfi, Founder of The British Blacklist talks about the influential website! 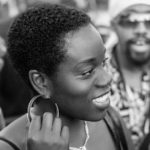 Providing visitors news, reviews and interviews on or with the UK’s brightest talents on stage and screen as well as behind the scenes, The British Blacklist has championed the contributions of black British creatives for the past 6 years. Its founder, Akua Gyamfi has helped to craft a movement that very rightfully has gone from strength to strength. Here, Akua discusses what inspired the site’s creation, accessing press opportunities that initially wouldn’t have been made available and suggests theatre creatives and events to look out for!

Hi Akua, you’re the founder of influential website The British Blacklist. What inspired you to create the resource?

One day back in 2011, I was pondering why I couldn’t find much information online about British Black creatives, I love lists and databases, so thought I’d combine the two and create my own list.

The British Blacklist is a database, offering visitors the opportunity to find out more about black British creatives working in a range of arts disciplines. What type of content can visitors expect from the site?

On the original site there was a database which listed the work cv’s of British Black creatives across screen, stage, literature and music along with an editorial platform which offered news reviews and interviews. In 2014 I had a rebrand of the site, and changed the url from .com to www.thebritishblacklist.co.uk. In the process we had to take down the old site with the database in order to have one platform. The new branded platform still delivers industry news, reviews of new films, books, tv shows, plays and pretty much anything arts related. We also interview creatives behind the aforementioned. The database is currently under re-development, as over the years, there’s been a lot more focus on people who work behind the scenes – crew for stage and screen so I want to update the database to be more inclusive of more British black creatives. I also want to update its functionality so it’s a lot more user friendly. I’m aiming to relaunch the database in 2019.
The website covers theatre productions, offering theatre reviews on the latest shows. How do you choose the shows that are featured?
It’s quite easy, The British Blacklist is a platform which primarily celebrates British black talent. So, this makes choosing work to feature relatively easy. If they’re made by or starring British black creatives. We do however, feature black talent across the globe, so then if it’s a black play, or made by a black person it’s also considered for review / interviews.
Visitors can also expect to find out the latest theatre news, what opportunities/events are on the horizon that you would suggest readers attend or find out more about?
I’m quite looking forward to The Convert by Danai Gurira, which will star British black  actress Letitia Wright. Also, Angie Greaves has a new play Take Me Back first night is tonight, (weds 5th dec)  …
Another element of The British Blacklist is your interview section. Who should visitors at present read up about within the theatre industry?
Well Natasha Gordon who’s play Nine Night has transferred to West End from the National Theatre is an exciting voice to keep an eye on. She also recently won the Alfred Fagon Award for Playwrights. Thought we haven’t interviewed her yet… Ah, we recently spoke to Nadine Benjamin, who is currently in the English National Opera’s production of La Boheme. Nadine is a lyric soprano, operatic singer.
The British Blacklist recently celebrated 6 years. What have been your website highlights?
Oh wow… that’s difficult. I think overall it’s the support and love we get from our audience and the industry. The access to spaces where black press are usually excluded has been made easier. I’m proud of every single writer past and present who have contributed to the rich content which keeps our supporters coming back. Just generally really proud of the whole thing.
In 6 years, have you learned anything in terms of running an online resource?
Yes. You need a solid team.
What advice would you give to aspiring content creators?
Know your strengths and weaknesses and find people who can strengthen where you’re weak. Know your audience and give them what they want. Be organised. Be strategic. Don’t worry about competition. Just today I saw a tweet from Bianca Miller who launched the nude lingerie line for black women. She had a picture of multiple brands of loaves of bread and said something along the lines that all these brands of bread exist, don’t worry about your competition, just focus on what you’re doing. Which is a similar process that has gotten me through these 6 years.
Questions by Lucy Basaba.
To find out more about The British Blacklist, visit here…
Akua Gyamfi, The British Blacklist
5th December 2018by Theatrefullstop