There’s more than just euphemism to unpack in Ellie Kendrick’s Hole at the Royal Court. Featuring an electric line up of actors, burlesque babes and music artists- fierce, fabulous women are aplenty. Running at 60 minutes, Kendrick’s writing debut bubbles with rage and spits in the eye of patriarchy. 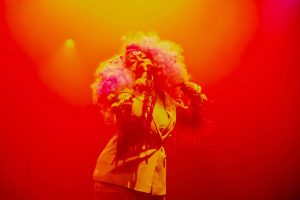 With direction coming from Helen Goalen and Abbi Greenland from RASHDASH it’s no surprise that Hole has the girl’s typical gorgeous aesthetic matched with an in-yer-face political attitude. Imagine, if you can, a punk rock, queer Bertolt Brecht mixed with a Florence and the Machine music video and you’ve kind of got a bit of an idea.

A series of clever vignettes open the piece. Ronkẹ Adékoluẹjo jumps from a giant cut out hole in the backdrop and slides down a pole to take centre stage in front of a follow spot. She tries with all her might to complete here monologue but is constantly interrupted by mic failures, jutting in at exactly the wrong moment. Obviously purposeful but delivered with a poignant precision that matches Adékoluejo’s performance.

Rubyyy Jones, another stand out performer, leaps on to stage, gasping for the spotlight to catch her every word. Except in this vignette the follow spot keeps moving, forcing her to contort onstage to stay seen. Jones conveys a feeling that I can only suspect many women in the audience can relate to, one of performing the impossible just to get heard. With her background as a cabaret star, it’s no surprise that her vocal abilities really lift the script and add dimension to what could be otherwise monotonous words.

It’s the simplicity that makes these vignettes so beautiful, but if you read Kendrick’s script these short scenes are quite far removed from how they were directed on stage.

Kendrick writes quite a messy script, both literally (the stage directions call for squashed tomatoes and cola to spill over the stage) and stylistically. It makes for an interesting read and I definitely suggest you check out the script in the Samuel French bookshop on the first floor.

But for a play that covers everything from women in Greek mythology to humans in the entire solar system, you’d think you wouldn’t be able to run out of material. However, the sporadic movement sequences and songs are more time fillers to meet the 1 hour mark than political outbursts.

The real beauty however is in its queer underworld charm like when the harpies are awakened from a giant fluffy hole in the ground, they parade in their punky tulle tufts like bad bitch ballerinas. Cécile Trémolières costume and stage design is perfect beyond compare, with particular highlights being the gorgeous mirrored leotard worn by Cassie Laytonthat allows her body to project a sparkling constellation across the entire studio.

When the play finishes the space possesses a burning energy. A sense that something has definitely ‘happened’. This isn’t a play about cohesion or conforming. It’s visceral, angry and unapologetic about whether you enjoy it or not. 4/5

Hole is currently showing at until Saturday 12th January 2019 at the Royal Court Theatre. To find out more about the production, visit here…