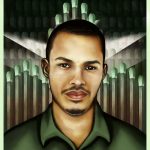 Soho Theatre has been at the forefront of discovering the UK’s top theatre and comedy talent for years; with various alumni having gone on to establish successful careers within the arts. Having completed a successful run at this year’s Edinburgh Fringe Festival, Soho Theatre favourite Archie Maddocks returns with his latest stand up show, Matchstick. Performed as part of this year’s Soho Rising Festival, a festival celebrating new writing, Archie tells us more about the show…

Hi Archie, you’ll be showcasing your latest stand up show Matchstick as part of Soho Theatre’s Soho Rising Festival on Friday 14 December. How are you feeling ahead of the show?

Pretty good. The show is good so I’m feeling confident that it will go well – just need to remember the damn thing!

Matchstick explores your flaws, thoughts as well as your personal connection to Grenfell Tower. Why in particular have you chosen to explore these topics?

Well flaws are always something worth mining in search of comedy, and since I have so many, there was plenty of stuff to dig into. There’s still more that I haven’t yet mustered up the courage to explore too. And, in terms of Grenfell I kind of couldn’t think about anything else over the last year. I wanted to try and help and seeing as I have no discernible skills I thought this would be ‘something’ rather than nothing. I also used the show to raise money to give to a charity set up in response to the fire – I managed to raise nearly £2000 which isn’t much considering the task that they have in-front, but again, any way that I can give some help feels like a tiny victory against the long fight for justice.

Matchstick has been well received, having been praised critically. How have you found reactions towards the show?

I’ve been amazed to be honest. There was some stuff that I was extremely nervous about before taking the show up to Edinburgh and that ended up being the things that people most responded to – it’s always humbling to see people respond to things you reckon nobody is going to understand.

First and foremost, it’s funny. I think a comedy show should always have laughs in it as the priority. It’s been called an “intelligent” show, but I’m a professional idiot, so I’d take that with a pinch of salt. There’s some toilet humour early doors too so if that makes you uncomfortable… I mean, saying I’m sorry would be a lie so I’m just… Yeah, dunno how to stop typing.

Laughter – a sense that we’re [more] powerful than we realise – good toilet technique – some stuff about kebabs – and the idea that it’s so worth looking out for one another and how important community can be.

Soho Rising Festival is a showcase of Soho Theatre’s home grown talent. How does it feel to be a part of the line up?

Elated, thrilled, honoured, all the good emotions and reactions. Soho Theatre is one of the top venues, and my favourite, so it’s an absolute pleasure. Just hoping I don’t let the team down really.

Who or what inspired you to pursue comedy?

I got into it accidentally. I’d always wanted to be an actor, and I’m a writer but never wanted to be in any of my stuff. Someone told me that my “brain worked weird” which I took as an offence, before they told me to try stand up comedy. I never knew it was a ting you could just do, so I started and luckily it went well enough the first time for me not to barricade myself away from the world.

What advice would you give to aspiring comedians?

Just do it – it can be great and it can be soul crushing, but there’s nothing like it. Allow yourself space and time to be shit. There’s jokes and funnies in everything. Seriously, just get up and try it and see how you like it. Or actually, don’t, there’s too many comedians around already.

Matchsticks will play at Soho Theatre on Friday 14th December 2018 as part of this year’s Soho Rising Festival. To find out more about the show, visit here…

« Previous post
Win a pair of tickets to a Vault Festival show of your choice!
Next post »
Hole @ The Royal Court Review