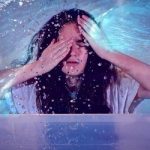 The topic of mental health can perhaps feel distant to some, however it affects us all. Defined by the World Health Organisation, Mental health is  ‘as a state of well-being in which every individual realizes his or her own potential, can cope with the normal stresses of life, can work productively and fruitfully, and is able to make a contribution to her or his community’. But what happens if you, or a member of your family struggles with the day to day stresses life can often throw at us? Writer and performer Isabelle Kabban explores this in her latest show, LOVE (Watching Madness). Drawing from her own personal experiences of her mother being diagnosed with Bipolar disorder, Isabelle speaks of the importance of discussing mental health, her approach towards creating the show and debuting the show at the John Thaw Mental Health Season at The Actors Centre in 2018.

Hi Isabelle, your show LOVE (Watching Madness) will show from the 31st July until 26th August at this year’s Edinburgh Festival Fringe (Pleasance Courtyard). How are feeling ahead of the run?

I’m so excited. It has come around so quickly and suddenly all feels very real. We’re going into rehearsals soon which is my favourite bit, I can’t wait to get cracking again. I would be lying if I said I wasn’t absolutely bricking it though. I think that’s normal…

The show ‘investigates mums, daughters and complexities of loving someone with mental illness – specifically bipolar disorder’. What inspired you to explore this?

My mum was diagnosed with bipolar a few years ago after being very unwell for a long time and having a severe breakdown. Mental health is something people are opening up about a lot more, which is great. However, I think people are still reluctant to speak about the realities of having a family member with mental illness and seeing someone you love suffer. It can be incredibly difficult and, at times, isolating, so I want the show to remind people that they’re not alone.

I went into R&D with a couple of collaborators (including my director Ruth) knowing a few definite moments I wanted to hit, and with a clear idea of what the show was about, but I didn’t really know anything else. The only text I’d brought in were some Facebook messages I’d found from my mum that she’d sent me a few years back, and that was it. We had a wild time exploring all the different possibilities of what the show could be. Ruth is a trained movement director, so there was a chance to explore moments through movement which was really freeing. Then I went away and started writing and forming the play properly. The whole process has been very collaborative and I love that kind of thing.

Don’t be afraid to share stuff in a rehearsal room even if you think it’s crap. For ages I was struggling to find the ending to the show. I’d written one but I was too scared to show anyone so I just left it out. One day we were in rehearsals and we just couldn’t figure out the ending, so I read out the one I had been hiding and suddenly we were like ‘YES this is it.’

LOVE (Watching Madness) was originally developed as part of the John Thaw Mental Health Season 2018 at the Tristan Bates Theatre. How was the show received then? Have you adapted the show since?

It was, and The Actors Centre have been so supportive of our journey developing this piece. Yes, it’s changed quite a bit since then, but the essence of the show is very much the same. The very first version of the show was received really well. Each person in the audience had their own interpretation of what certain moments were about. It was amazing to see people unpick your work like that and call moments that you hadn’t even thought of.

It’s fast paced, funny and a bit of an emotional whirlwind.

Even though the show is very personal, I would love for people to feel like their stories and their experiences have been heard. I want the show to start conversation.

What advice would you give to aspiring writers/performers?

Surround yourself with inspiring friends who lift you up.

If you see a show you love, go and chat to the creatives after. Email the writers/actors/directors who are doing really well that you admire. Normally they reply really kindly and it suddenly makes you feel like maybe, one day, you could be like them too.

LOVE (Watching Madness) will show from Wednesday 31st July until Monday 26th August 2019 at the Pleasance Courtyard as part of this year’s Edinburgh Festival Fringe. To find out more about the production, visit here…