The End of History @ The Royal Court Review

After the success of The Cursed Child, Jack Thorne and John Tiffany team up again. for The End of History. This time, they have focused their attention on a family based in Newbury, detailing their lives through time; first in 1997, then 2007 and finally in 2017. 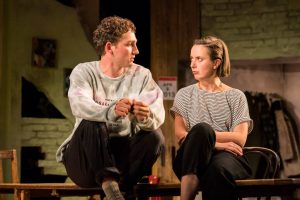 When the play begins in 1997, the parents, Sal (played by Lesley Sharp) and David (David Morrissey) are preparing dinner for their three children. Their eldest son, Carl (Sam Swainsbury) is bringing his new, and posh, girlfriend, Harriet (Zoe Boyle) home, which sparks a debate with left-wing, politically minded Sal and David. The parents are passionate about their beliefs and comments are made throughout the performance, ranging from Tony Blair to Brexit as time moves forward.

John Tiffany’s directing is on point, keeping the focus on the actors throughout. The entire cast is precise and manage to represent the tension among each family member effectively. Laurie Davidson, playing Tom, is very moving. He portrays the youngest child of the family, who never quite manages to get his life together.There is also an enjoyable movement sequence between each time lapse in the play. Steven Hoggett’s movement direction works well and the sequences provide a moment of calm between the family’s squabbles.

As the play develops, however, it seems the text is unsure of itself in some ways. It titter-totters between the personal and the political without fully committing to one or the other. This is a shame because all the ingredients are there, but perhaps by trying to explore everything, the performance falls short and does not manage to blend the familial world with the larger scope of the political drama it is trying to be.

Despite this, Thorne’s play is full of witty remarks and dark humour that are highly enjoyable, all delivered by a very impressive cast. 4/5

The End of History is currently showing until Saturday 10th August 2019 at the Royal Court Theatre. To find out more about the production, visit here…