Writer Tim Cowbury and Director Mark Maughan talk about their production of ‘The Claim’ taking part in Edinburgh Festival Fringe 2019! 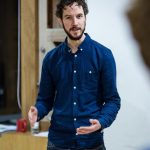 Writer Tim Cowbury and Director Mark Maughan’s The Claim observes the process of a migrant seeking asylum, a topic we assume although we hear lots about, we know about; yet many of us couldn’t begin to even imagine the pressure of awaiting our fates by a nation completely new to us. The time we live in is incredibly divisive, immigration a top talking point in many a debate, and a talking point that will remain for years to come, due to its complexity. Drawing from a 2 year research process, exploring this topic in  further detail, Tim and Mark discuss their timely production, currently showing at this year’s Edinburgh Festival Fringe.Hi Tim and Mark, your show The Claim will take part in this year’s Edinburgh Festival Fringe throughout August. How are you feeling ahead of the run?

We’re writing this the morning of the first show, so we’re feeling appropriately Fringey, i.e a mad mixture of excitement, nerves, exhaustion and hung over. Taking a longer view though (!) we’re feeling proud to bring back the show as part of a really well-curated programme at the Roundabout and an extremely carefully-curated British Council showcase. It feels like a testament to the enduring appeal of The Claim after a sold-out run and tour last year – a chance for a lot more people to engage with the urgent themes and powerful experience the play enacts on its audience.

The show explores the very timely topic of migration. What inspired you explore this topic?

Well, sadly, it felt pretty much just as timely when we had our very first conversation nearly 5 years ago. It was the summer of the Scottish Independence referendum and of UKIP’s biggest ever electoral gains, while war in Syria and elsewhere had already been displacing huge numbers of people for 3 years and boats crossing from Africa to Europe were regularly capsizing with deadly results. On top of all that, we were both fascinated by the identity crisis of our own country, that fully reared its head a couple of years afterwards with the Brexit vote. But we knew all this had to still lead to an entertaining show, not a preachy one! When we discovered what an absurd language game the asylum interview for refugees here in the UK was, it felt like that had to be our play.

The creative team spent two years researching and developing the show by spending time at immigration courts, working closely with asylum seekers and refugees and working with representatives from migrant organisations. Can you explain the research process further?

Moments like visiting immigration tribunal courts were moving and infuriating ones: we went along as public observers and sat in a corner of what felt more like an office than a court, while two men were skyped into their own hearings from a near-by detention centre where they’d been kept for many weeks. The fury and sadness we felt at their disempowerment at such a crucial moment of their lives will probably never leave us.

But the main thing is that the research really became much more than a preliminary stage, more than just research – many of the people we met (including dozens of refugees) became part of the project and continue to be involved now. People we met through excellent organisations like Detention Action, Right to Remain (who are running a brilliant, free workshop in Edinburgh at the Fringe), Refugee Council, GRAMnet, Counterpoints Arts and Freedom From Torture were incredibly generous in sharing their own experiences of the asylum decision system.  Many came into the rehearsal room during various workshop periods the play went through, taking a small share of ownership over it and creating their own pieces in response. Some of these responses can be seen at the Royal Society of Edinburgh throughout the Fringe, in the ‘I am just my words’ mixed media installation there.

The Claim integrates the set, sound and lighting to reinforce the narrative. How have you both worked with the creative team to bring the show to life?

That’s something Mark has led on as director, and it’s been about accentuating the way the show enacts the experience of the asylum interview on the audience rather than simply presenting them with a picture of it. We spoke a lot initially about metaphor for the interview as one of a machine: something refugees are put through, placed inside of, spun around within. But one that can, especially at the start, feel very innocuous and never too physically overbearing. So what begins as an actor wandering into a space where the audience is lit becomes a stark, increasingly claustrophobic space with lighting coming from vertical posts and from within a podium in the middle of the space on which Serge, the Congolese refugee, is politely but insistently pressured to sit. It becomes incredibly theatrical but the brilliant designers have allowed the piece to never lose touch with its storytelling roots: the actors talk to the audience, imploring them as well as each other to listen to their stories.

It’s always a learning process: Tim has (re)learnt how fiendishly challenging his very technical, rhythmic, word-game of a writing style is for actors to learn, Mark has (re)learnt how much more insane it is opening a show at the Fringe than anywhere else! On a deeper level, over several years we’ve learnt a lot about the asylum system, refugee lives here, and in a show about how much people fail to just listen, we’ve ourselves hopefully learnt to be a bit better at that.

An unsettlingly comic and ambiguous interaction with three brilliant performers who talk to you but (don’t worry) not in a way that asks you to do or say anything during the show! One that slowly slides towards much darker territory as one performer’s words are absurdly twisted in the most high-stakes word-play game you’ve ever seen. It’s an experience that would be ultimately funny if it weren’t so devastingly true: as much as the play is a wild fiction, its absolutely grounded in a reality being played out in asylum interviews every day here in the UK, up and down the country.

A sense that they can’t just put the show away, a need to keep thinking and talking about their experience and the show’s issues. Our biggest hope is that this turns into a desire to get involved, in whatever way that suits: we have a pamphlet about ways to take action, available on the show’s website. But, in a play that’s also about the UK and countries of the global north as well as the experience of refugees, self-reflection and a desire to think openly and to listen more are part of the change we’re seeking.

What advice would you give to theatre makers, particularly those looking to make political theatre?

Do it differently. Whatever political theatre was, whatever it maybe still supposedly is, it needs to be invigorated by a kind of deviousness, approached sideways, surreptitiously. Maybe it needs to not look like political theatre. That’s how we approached The Claim. More of an impact can be made if people don’t entirely know what’s coming, what they’re part of, if the form is innovative. Our idea of politics and political theatre can be far too settled, and a piece like the claim aims to disturb that settled-ness. Ask difficult questions, don’t always try to provide – or leave the audience with ready-made – answers!

The Claim is currently showing at the Roundabout, Summerhall until Sunday 25th August 2019 as part of this year’s Edinburgh Festival Fringe. To find out more about the production, visit here…

To read our review of the production last year at the Shoreditch Town Hall, visit here…

« Previous post
Playwright Ronkẹ Adékoluẹjo talks about her play ‘Teleportation’ showing at the This is Black Festival!
Next post »
Director Mingyu Lin talks about Chris Ruffle and The Rimbaud Verlaine Foundation’s production of ‘Before the Wall’ showing as part of Edinburgh Festival Fringe 2019!