After his rather unsuccessful venture Caspar Western Friedrich, director Philippe Quesne returns to the Münchner Kammerspiele with a pastoral set in a dystopian future. Humanity has finally succeeded in destroying itself. Only four scarecrows remain on a farm, archivists of the past who run their own radio station. 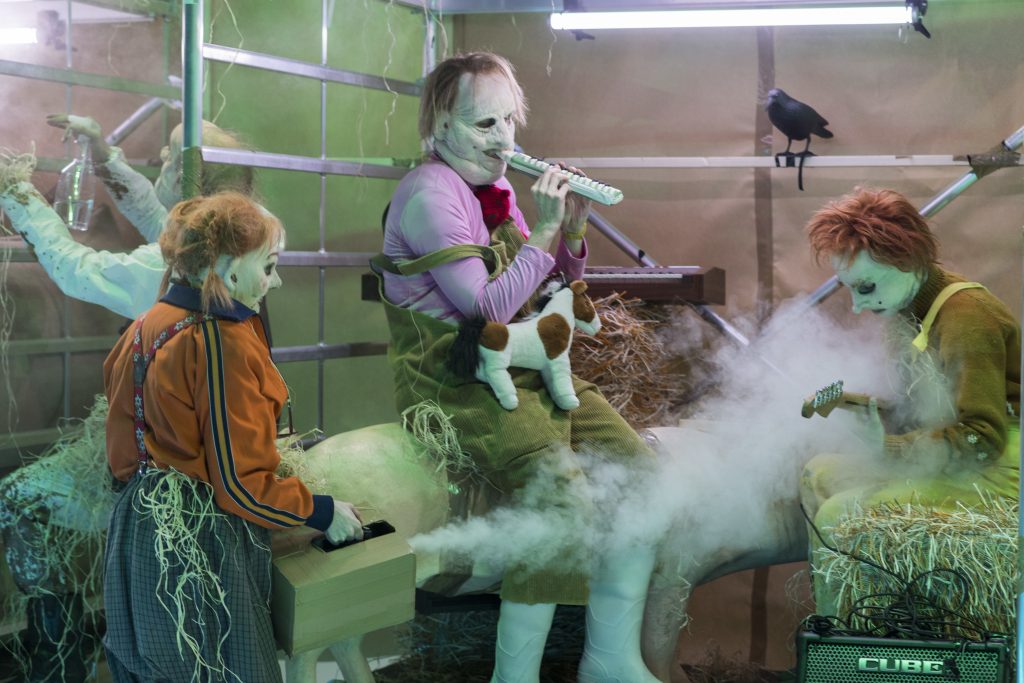 Four actors dressed up as scarecrows enter the stage, carrying hay bales, partially decorated with political slogans, and singing, “I’m Walking to a Farm to Grow Wheat”. They are wearing masks, and hay is sticking out of their hand-me-down clothes. Their voices sound alien. One scarecrow seems to record a bird singing but the sad truth is that all the birds have become extinct and the birdsong is just the playback of a recording. What a pity that scarecrows were always working to keep the birds away, and now they are sorely missed. This thought is too much for Sissi (Julia Riedler), she turns off the recording. The scarecrows share stories about the farmers for whom they used to work. All of them are dead. Most of them having taken their lives because industrialised farming and glyphosate destroyed their farms. Only the genetically modified super cows survived.  When the insects died, the birds died. Maybe they committed suicide as well? They decide that this might be a good topic for one of their radio shows. Suddenly a French scarecrow, who has been an avid listener to their pirate station, arrives. A former activist, whoused to attend protests against pollution and climate change, he would like to join this community of scarecrows. He is welcomed with open arms.

Although Quesne’s production features an apocalyptic future, the scarecrows remain optimistic. Globi (Stefan Merki), who used to work on an organic farm, actually finds one remaining queen bee named Margrit, who is immediately interviewed for the radio program. Globi has to interpret for Margrit because she speaks only Swiss German. The interview concludes with a rendition of the song “Stand by Me”, dedicated to the last queen bee flying. After quite a bit of slapstick and beckettian moments, we find out that the scarecrows are really “carecrows” guarding a huge truck filled with magical glowing eggs, which they intend to take into the world to hopefully create new life.

Kammerspiele actors Julia Riedler, Stefan Merki und Damien Rebgetz are joined by Léo Gobin and Gaetan Vourc´h from the Théatre Nanterre-Amandiers in Paris, the co-producer of this world premiere. Their performances are convincing and provide subtle comedy.

Usually there is very little dialogue in a Duquesne production but this time the scarecrows are quite talkative. They sing and recite Shakespearean verses and poetry, mostly in English. Their voices are so alienated that the text is rather difficult to understand. This is another aspect – just like the elaborate masks – that reminds one of Susanne Kennedy’s work. Both directors tend to focus on the visual aspects of a production, and Quesne worked in stage design before founding the Vivarium Studio Company.

There are intriguing images and amusing scenes in this highly theatrical production, but the play drags on a bit. Quesne touches upon a number of philosophical and political questions, however he does not delve too deeply and maintains a chilled and rather joyful atmosphere. 3/5

The production is in English, there is also a bit of German and French.

« Previous post
Winners of the Inaugural London Pub Theatre of the Year Awards Announced!
Next post »
Meet Me at Dawn @ The Arcola Review