Winners of the Inaugural London Pub Theatre of the Year Awards Announced!

The Awards winners are as follows:

King’s Head team lead by Artistic Director Adam Spreadbury-Maher has an outstanding track record for nurturing theatre talent through associate companies, individual artists and the King’s Head director’s training programme.  Spreadbury-Maher has also championed fair pay with an equity agreement in unfunded fringe theatres which has had a positive knock on effect in the industry.  He has also made a commitment to opera and LGBTQ queer theatre, which has resulted in opera being more accessible and queer stories being enjoyed by all.

Jack Studio theatre has very imaginative productions and has built up a very loyal local audience. The theatre is very welcoming and is accessible as it’s ground floor.   They are also very supportive of new writing and new artists, nurturing some of the most extraordinary talent coming onto the fringe scene.   It also has outstanding technical capabilities.

The Hope Theatre, Islington has an eclectic programme, and is open to new material.  Despite being the smallest pub theatre with limitations of space, there’s a lot of invention shown by directors in laying it out in ways that both involve the audience directly and at other times maintain a fourth wall when that’s needed, too.    It does remarkably well to make itself a distinctive venue that competes on quality with much larger venues.

Founded by Léonie Scott-Matthews in August 1968, and still going strong after 51 years. Leonie is known for her support of all creatives and the theatre features an eclectic offering of plays from classics to new writing. There’s a regular Sunday night open mic for poetry theatre. It has recently been made a community asset which should safeguard its future. The best asset is Leonie herself and this award recognises the wonderful work she has done over such a long period. Going up the stairs to the comfy theatre you are always offered a warm welcome by Leonie herself on the door.

Awarded to Katy Danbury for her ground-breaking work on equality, inclusion and accessibility.   She has encouraged creative and thoughtful ways of integrating access into theatre productions, with a consistently high standard of work.   She also continues to run the London Horror Festival which opened at Old Red Lion Theatre in 2011 and continues to be part of the cultural landscape in London during the Halloween season.

The Awards ceremony was generously hosted by David Brady, Artistic Director of both Proforça Theatre Company and Lion and Unicorn Theatre.  A champagne reception was followed by an introduction by Heather Jeffery, Founder and Editor of London Pub Theatres Magazine.  Thereafter several pub theatres were given a Mention before the Awards Ceremony began. Actor, playwright, and theatre director, Richard Braine who played “Gussie” Fink-Nottle in Jeeves and Wooster, and can currently be seen in Holby City, presented the major award. 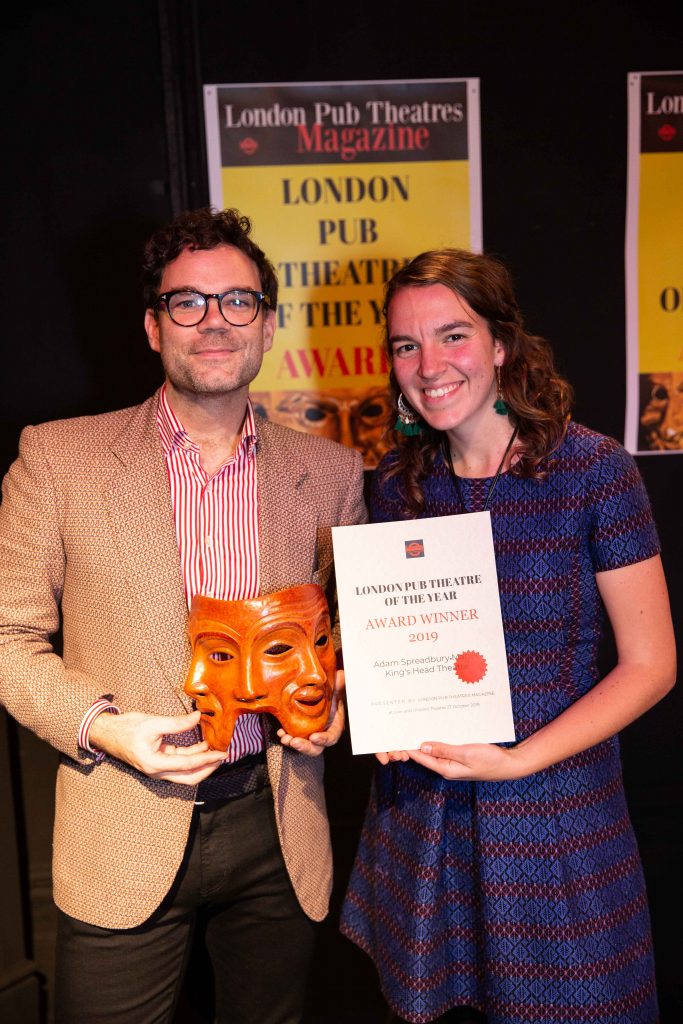