Over the top and elaborately self-deprecating, High Fidelity plays on masculine displacement of responsibility while offering a slightly tropey adaptation of Nick Hornby’s romcom of the same name. No matter how witty, charming, occasionally perceptive and colourful this musical is; I can’t help but leave with a feeling of something being missing. 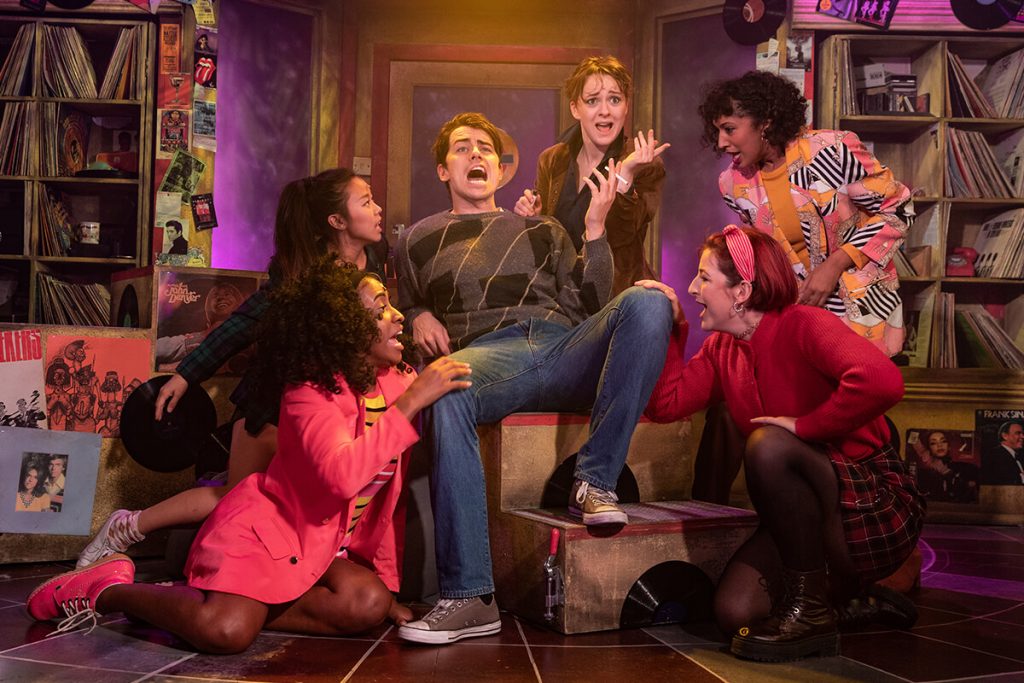 Rob (Oliver Ormson) begrudgingly welcomes the audience into ‘the last real record shop on earth’, in his Black Books cynical approach to the world, Rob revels in his self-indulgent angst. The story essentially follows Rob’s desperate, pitiful attempts to get his girlfriend to come back to him. Where director Jackson Greaves avoids the tropes of cringy musical theatre, there are numerous occasions where High Fidelity does conform to the conventions without questioning or deconstructing in the same way it seems to do so well.

Greaves acknowledges the overtly performative approach that prevents High Fidelity from falling into the awkward tropes of mainstream musical theatre, building from this to develop an ironic mockery of cliché conventions that plague musical theatre through caricatures. However, the standout in subverting tropes and played out narratives is in Greaves’ choreography which allows the show to mock the protagonist, while creating a playful environment where masculine self-righteousness and pretentiousness is deconstructed in a witty fashion.

Ormson is fantastic as the thoroughly dislikable Rob Gordon, who presents a witty exploration of male avoidance. Despite occasionally over acting, he allows the audience to see through the barriers he puts up, resulting in an interesting critique on the default man. The same cannot be said for Shanay Holmes as Laura, the one-dimensional ex-partner of Rob, and while it may be that she is not given much room to develop from resolutely pissed off, there is little to engage with on her part.

Unfortunately, where the show shines in its witty subversion of convention, it becomes oddly predictable at frequent points and where some jokes are well constructed, others become predictable.

Supporting roles are on the whole enjoyably naïve, Carl Au and Robbie Durham present two beautifully incompetent friends stumbling through life with their own standout moments. With numbers such as No Problem and the brilliant Do you know what I mean Robbo? the chemistry and well-constructed jokes make the performance. Essentially, I guess my frustration with this show comes from the fact that the men are given so much character development while it feels the women are not given the room to develop and fulfill the potential laid out.

Essentially a witty, self-aware musical which manages to avoid most of the over-laboured conventions of musical theatre, and I don’t quite know what is missing but it occasionally feels a little meaningless. For someone who tends to steer clear of musicals, this is both well put together and truly enjoyable, but fails to say anything particularly profound. 3.5/5

High Fidelity is currently showing until Saturday 7th December 2019 at the Turbine Theatre. To find out more about the production, visit here…