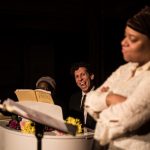 Certain Blacks return with their latest festival, ‘Circus Circus Circus’, a mixed programme of live art, spoken word, jazz, opera and circus. An eclectic performance line up, Certain Blacks continue on their mission to showcase works exploring themes via various theatrical forms. Bringing his latest show 24 Italian Songs and Arias to Rich Mix London on Friday 8th November, Performance Artist and Storyteller Brian Lobel’s production is an exploration of failure, loss and family; presented in the form of an operatic recital. Joined by soprano Gweneth Ann Rand, both performers reflect on previous experiences. Brian tells us more about the show!

Hi Brian, you’ll be taking part in this year’s Circus Circus Circus Festival on 8th Nov with your show 24 Italian Songs and Arias. How are you feeling ahead of the performance?

I love this work, and love working with the cast and the material. It’s so nice to be around singers and these beautiful simple songs. I’m nervous, of course, because I want to make a great show, and because we’re introducing one new performer (Allyson Devenish, an amazing accompanist) but that’s all the good kinds of nerves.

24 Italian Songs and Arias is an exploration of failure, loss and family. What inspired you to explore these further?

I originally made the show with and for my mother who, in the past, has found my performance artwork difficult or impossible to digest. Her not liking or not getting my work made me feel like a failure, so instead of hiding from that feeling, I made a show about that feeling, and interviewed a number of amazing musicians and performers about their experience of failure. While unfortunately, my mother is no longer in the work, the theme of failure and feeling like a failure in front of your family still remains a central theme.

I’m interested in failure because it seems like it never really happens anymore, or rather, that so many people can get by after failure upon failure (Trump, May, Johnson, etc etc etc) but not in opera. In opera, people can be quite strict about what is and what is not a failure – a note, a trill, an arpeggio – so I’m inspired by this strictness as a starting point for thinking.

The evening will feature soprano Gweneth Ann Rand, an Opera singer who has performed at the Royal Opera House and the English National Opera, yet reflects on not winning the Oxford Samuel Beckett Theatre Trust Award and the BBC Cardiff Singer of the World competition. How have you both found exploring this?

As artists, we are constantly putting ourselves forward – for auditions, for grants, for curations, etc – and some failures are crushing, while others aren’t really of much importance. 24 Italian Songs & Arias is about those critical failures, those that moved your life course from one direction to another.  When they are happening they feel SO huge, SO impossible to bounce back from… but in hindsight, although you might remember them, they probably weren’t the GIGANTIC thing you thought they were. Or were they. 24 Italian Songs & Arias recognises that sometimes what doesn’t kill you doesn’t always make you stronger.

The evening is a celebration of world class opera performers and the power of the voice. What was it about the performance form that you wanted to celebrate?

I love the performance form of the recital: simple, elegant, focused on the music and the musician performing. It’s such a pure form of art and yet I don’t often see them performed with any sort of narrative. I’m a performance artist, and a storyteller and American-born and I want FEELINGS and STORIES more than just the music. So I’m hoping our unique little recital will be an exciting intervention in the form.

I have gained such a huge respect for singers and the craft of singing, particularly classical music and opera. It is a career trajectory that is gruelling and fulfilling.

A classical music recital with gorgeous renditions of songs (that you’ve usually only heard in tv advertisements) and lots and lots of heart.

I would like them to understand their failures as being part of a world of failures, and of a community of people who have shame or embarrassment about their own failures. We are most sad about our failures when we feel alone in our failures – sharing them and talking about them with others can normalise that everyone fails sometimes.

What advice do you have for aspiring live artists, writers and theatre makers?

Keep making and don’t wait for an invitation to make and to create. If you’re constantly making and seeing work, then even if you’re not ‘working’ or sustaining yourself financially as an artist, you’ll be an artist. The worst that happens is that people wait to be an artist, not realising that it is both a career AND a life.

24 Italian Songs and Arias will show on Friday 8th November as part of Circus Circus Circus Festival at Rich Mix London. To find out more about the production, visit here…