Welcome to Bear Ridge, a snowy mountain village suspended in time, once thriving but now forgotten.  Ed Thomas’s setting for On Bear Ridge possesses an uncanny resemblance to the current neglected valleys of Wales – places that have been lost to the attractive cities that chug with power and production. Cities that have no time for the sleepy likes of John Daniel (Rhys Ifans) and Noni (Rakie Ayola), the convivial shop owners of Bear Ridge Stores who, with slaughterhouse boy Ifan William (Sion Daniel Young), refuse to leave their much loved home. 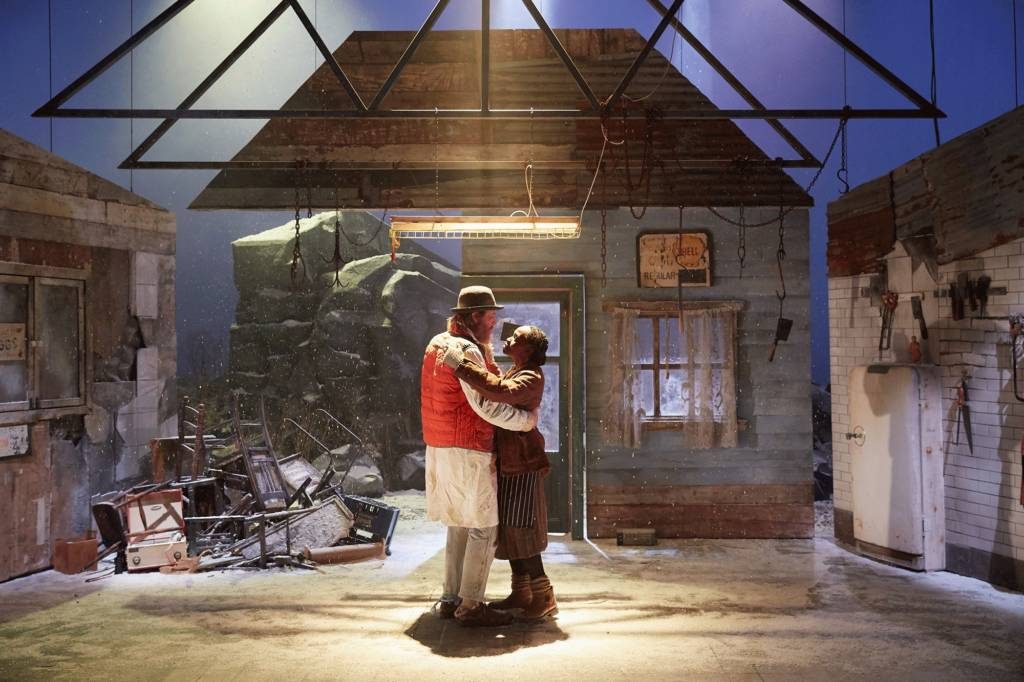 The three of them are trapped, trying desperately to piece together their old lives in a new world that has been ravished by violence, war and seismic change. Lingering in the back of their minds is the death of John Daniel and Noni’s son Twm Siencyn, the boy who dared to use his brain and seek adventure outside of Bear Ridge.

Slowly running out of provisions, their memories are the only thing that can offer any sustenance. But it is their misremembering that is key here – Thomas asks us to look inside, to find our own Bear Ridge, the crutch that we rely on to offer ourselves hope.

Ifans has a masterful command of the script. His Welsh lit poetically lulls and softens the blows of more tender lines: ‘time fell asleep in the snow and never told us.’ He elevates his dialogue and holds the piece together with Ayola who divinely embraces the natural warmth of a Welsh Mam, an archetype that remains in Welsh culture today.

Thomas has wonderfully anchored the script with a hearty Welsh humour – ‘no you’re alright, no need to apologise’ – is Noni’s reply after The Captain (Jason Hughes) threatens her with a gun.

It’s these moments of dark comedy that lift a very heavy script. Though elements of comedy are peppered throughout, there are missed opportunities to introduce more humour in places.

It’s rare that an 85 minute show feels like a drag, but On Bear Ridge frequently loses itself in its absurdism – any more dialogue and it wouldn’t have just been John Daniel falling asleep.

Vicky Featherstone’s co-direction with Thomas lacks a distinctive precision, with the best direction coming at the end as John Daniel, Noni and Ifan William all silently drink tea amid the screeching jet planes.

Comparisons have been drawn with Beckett’s work, textually think Krapp’s Last Tape or Rockaby, but George Buchner’s exploration of destitution and dwindling madness in Woyzeck springs to mind more.

Welsh theatre does have a tendency to always ‘look back’ to a forgotten past and dwell on the country’s shortcomings rather than imagine what the country could become. And though On Bear Ridge doesn’t sway from this trope, it is exciting that it premiered at the Sherman in Cardiff after being commissioned by the National Theatre Wales.

Just as John Daniel and Noni believe in their own false memories of their beloved village, On Bear Ridge attempts to ask Wales to question its own reliance on yearning for a past it lost a long time ago. 3/5

On Bear Ridge is currently showing until Saturday 23rd November 2019 at the Royal Court. To find out more about the production, visit here…