An exceptionally intimate reconsideration of hyper-masculinity, Shook is brilliantly structured in its damning condemnation of a system that leaves many without aspirations. Although it’s a little on the nose at times, Samuel Bailey and Papatango manage to present a compelling narrative of three young offenders facing unanswerable questions. 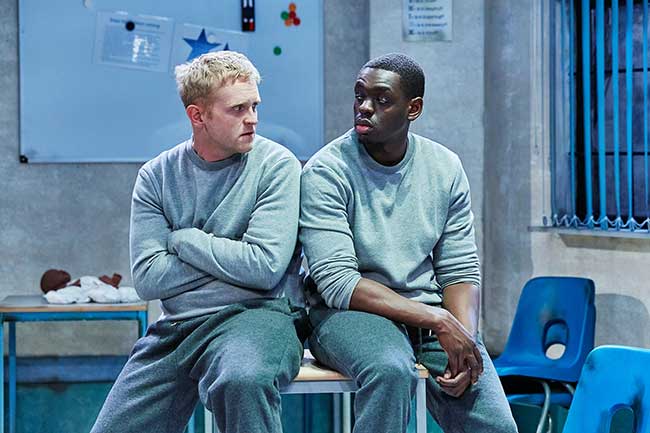 Shook introduces us to three young offenders as they reluctantly begin a parenting course. As arguments and status battles ensue, Bailey’s timely, perceptive script points out that in the face of oblivion we find fault in triviality to avoid looming questions. This combined with the playful incompetence of Cain (Josh Finan), the witty power of Riyad (Ivan Oyik) and the unsettled silence of Jonjo (Josef Davies), makes for an amusing depiction of competitive masculinity and a fear of vulnerability.

Bailey’s carefully constructed dialogue plays brilliantly with tension and release, creating moments of genuine hilarity, most notably the MBE moment in which Riyad unleashes an unexpectedly empowered criticism of the relics of imperialism. While this moment is a little too obvious in its criticism of the establishment and what it is founded on, it is an emblematic moment when Bailey and Oyik convincingly balance the humour and politics of this piece.

All deeply insecure, Oyik, Finan and Davies all depict people in transition, asking what it means to be a man in a changing world, drowned in existential terror and tentatively attempting to deal with mental health in their own conflicted intolerant society of the hyper-masculine young offenders’ institution.

The rigorous criticism of the institution presents a troubling reality that often we object to the structures we are manipulated by yet are indoctrinated to the extent that we are lost without them. This is distilled exceptionally in Cain’s final moments when the heart-braking reality that ‘It’s too late’ comes into view, as he becomes aware that the system has given him a life sentence.

The show occasionally labours points and is a little slow-moving, but this is made up for in the beautifully yet painful final scene as the elephant in the room wreaks havoc and destroys any security any characters had in themselves. Leaving us with the reality that ‘Shit like this just keeps happening’, and that the lack of effective, sustained rehabilitation leaves the three of them with little to no options when they eventually leave the young offenders institution.

Despite being completely valid, the subtext to this show is a little too on the nose, however this is compensated for by outstanding performances by the conflicted but essentially compassionate teacher Grace (Andrea Hall). Shook is an unavoidably relevant show in a time when masculinity itself is having a long-awaited questioning, and the system continues to fail thousands. 4.5/5

Shook is currently showing until Saturday 23rd November 2019 at Southwark Playhouse. To find out more about the production, visit here…