First staged in 2017, this Rupert Goold directed production of Mike Bartlett’s Albion returns to the Almeida two-and-a-half years after its first outing, retaining most of its original cast, and a heightened significance in light of recent national developments. 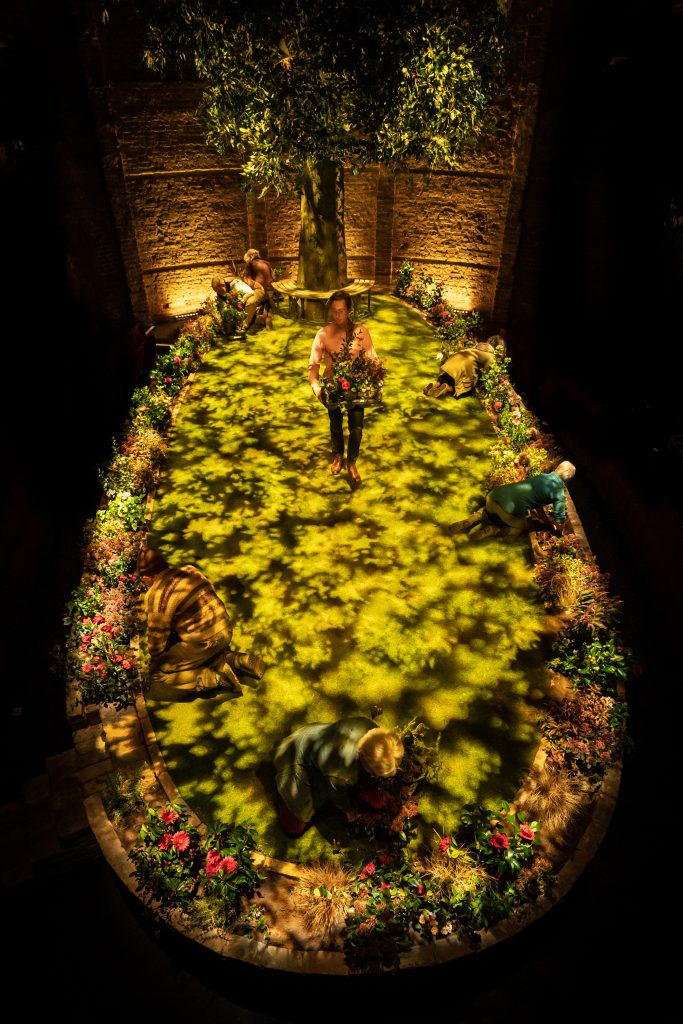 The play centres on a cosmopolitan family who have upped sticks from London, led by hands-on matriarch and businesswoman Audrey (Victoria Hamilton) who, following the recent death of her soldier son (Seen briefly in ghostly flashes between acts) wishes to start a new life in a rural corner of middle England.

Over the course of the play Audrey renews simmering tensions with her oldest friend, and manages to alienate her dead son’s lover, her comically ineffectual husband, and her aimless, entitled daughter as she pursues a bloody-minded mission to refurbish the house and garden, and return the home to its former glory. Audrey also finds herself at loggerheads with locals who consider the garden a community asset, and the long-term housekeepers, who she wishes to replace with a much younger, and more expedient polish alternative.

While sifting through the internal family conflicts Bartlett’s play touches on plenty of wider themes: national identity, nostalgia, generational division, class tension, economic inequality and immigration are all explored on this patch of green and pleasant land. However, none are considered particularly overtly, providing more of a contextual, allegorical undercurrent to the families many ups and downs.

Director Rupert Goold successfully draws out the rhythm in Bartlett’s dialogue, and knows how to wring out the moments of tension. However, many choices during the play’s more stylised sections don’t quite land, particularly the set piece of unrestrained histrionics just before the interval, not helped by a grating and incongruous choice of musical accompaniment (clumsily chosen music unfortunately remains a common feature throughout). The need for such outbursts to relieve the stifling emotional repression is fully understandable, but they could be handled more deftly than this.

The stand out is Victoria Hamilton as Audrey, offering a detailed characterisation of a conflicted woman caught in the throes of nostalgia, she is damaged, yet stubborn, bullish, yet with a dry humour that is hard to resist. Hamilton’s Audrey is a rounded study of British idiosyncrasy, executed with a balance of power and delicacy that serves to elevate the entire production.

Albion is a play that, while wishing to draw attention to its nationally relevant thematic concerns, seems not quite as interested in the wider political dimensions as it is in making well-trodden observations on the existential crisis of a certain dysfunctional section of society, to which many would probably struggle to relate.

As such, Albion doesn’t deliver as the socio-political allegory it would have us believe it is, lacking the depth and breadth of insight that the themes it regards truly deserve, with Goold’s direction often succumbing to the jingoistic melancholy the play seemingly aims to puncture.

Nonetheless it remains a highly watchable, engaging production, primarily down to Bartlett’s knack for dialogue, the simplicity of staging, and the accomplished performances of its talented cast. 3/5

Albion is currently showing until Saturday 29th February 2020 at the Almeida Theatre. To find out more about the production, visit here…