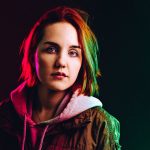 In light of our current political climate, we’re left questioning what the future holds – a nation built on the efforts of many cultures, revealing deep rooted tensions heightened by our current political head of state. Migration is the root of all of our stories, whether directly or indirectly; the universality of migration a complex facet of our lives. Exploring this further in her current show NOTCH, writer and performer Danaja Wass draws from her own personal story of leaving Croatia to start a new life in Ireland for a better future. Ahead of the run, Danaja talks to us about exploring the show’s themes, how she approached creating the show and what audiences can expect.

Hi Danaja, your show NOTCH will take part in this year’s Vault Festival from 19th until 23rd February. How are you feeling ahead of the run?

Very excited. Happy. Petrified. Also, a tad nauseous. So perfectly normal all in all.

NOTCH is a ‘dark meditation on migration, homelessness and obsession’. What drew you to explore these themes?

I guess there are certain cultural things I have been taking for granted and didn’t regard as unusual or significant.  As post-communist Croatia is a very young country, it is still developing and trying to find its socio-economic position in the region. It is also a country that carries a lot of collective trauma due to the recent war. Since moving away I have come to understand how trauma works, and how elusive the effects of it are. Hence the obsession and other effects of trauma.

In the past couple of years, I have seen thousands of young Croats moving to Ireland in a search for a better life, working at menial jobs – happy to be earning. Not a lot, just earning.  What they don’t expect to see is people living on the streets of the capital. For a country that is regarded as far from comfortable or affluent, Croatia’s number of homeless is surprisingly low. Very quickly they realize, as I did, that they are only ever one paycheck away from being homeless, and that securing permanent housing in the midst of a housing crisis is a lottery, and that being foreign may or may not be a contributing factor to securing housing.

The show draws on your personal experiences of being an immigrant in Ireland. How have you found the process of exploring your own story?

Tricky. I have tried to remove a lot of myself from the narrative, by giving the protagonist a very different set of characteristics and raison d’etre, since we already share a lot of the set circumstances to do with heritage and experiences. I wanted to create and examine this character, in all her flawed complexity. In order to do that, I had to remove my moral stance and scrutiny from it.

I haven’t. I often feel like the play just fell straight out of me and onto the page. I am fully aware of how cringey this sounds.  A lot of the times, I would look to my wonderful director Maddy (Madelaine Moore) for guidance through the maze that this play is. A lot of work has been about giving it shape and colour – making the transition from cognitive to visual. To do this we are using projection to bring the main character’s inner world to the surface.

The story explores her obsession with a local woman called Mags, so we called in Irish actor, Evelyn Lockley who has done such a beautiful job bringing this idealised vision of who Mags is to the screen. We have also been working with movement director, Lucy Bishop of The Outbound Project, and Croatian documentary maker, Eva Kraljević, who has shot some really amazing footage. She has been a fantastic addition to the team, because the themes also resonate with her, as a Croatian living in the UK. It’s a very steep learning curve for all of us creatively, but that is what makes it so exciting to be able to explore this story in a slightly more abstract way.

Patience and Structure. Two things that don’t exactly come easy to me as a Croat. It is still very much a process.

A peek into someone else’s world. Sounds quite tacky, but I hope it is true. It’s quite an ambitious project, but a very necessary story considering the current political climate, so hopefully they will be encouraged to think and talk more deeply about where we go from here.

An experience of how it feels to be in someone else’s mind/ shoes/ country, and if I am lucky – questions. One that I particularly wrestled with, while creating this show is: “How can we separate the person from the worst thing that person did, is it even possible?” It’s not Dostoevsky, but I think it’s an important one.

You can’t sit at home and judge your work, to decide if it is any “good”. You are not objective, and most of us have the tendency to think that everything we create is deficient or mediocre. Apart from that, get out of the house and out of your own way!

NOTCH will be showing from Wednesday 19th until Sunday 23rd February 2020 at this year’s Vault Festival. To find out more about the production, visit here…