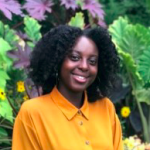 Being bicultural, you often find that you’re constantly observing the world through two lenses; quietly balancing two cultures side by side whilst trying to figure out your very own identity. Drawing on her very own experiences of being both Nigerian and British heritage, writer Esohe Uwadiae presents She Is A Place Called Home, an exploration of having dual nationalities and sisterhood. Ahead of the show’s performances, Esohe speaks to us about taking part in this year’s Vault Festival, having the show developed as part of VAULT Festival’s New Writers Programme and offers advice to aspiring playwrights!

Hi Esohe, your show She Is A Place Called Home will show from 3rd to 8th Mar as part of this year’s VAULT Festival. How are you feeling ahead of the show?

Excited. It’s a really special feeling to know that my words and characters are soon going to be brought to life. We’ve recently begun rehearsals and I can’t wait for other people to see it.

I’m also incredibly grateful. Something that’s really stood out to me during this whole process has been the kindness of people. Everything from offering us an interview, like this, resharing our content or wishing us good luck. When your to do list is growing and time is flying by, it can really feel like it’s you against the world. You question why you’ve done this to yourself. Maybe even regret it a little. Then someone tells you how they can’t wait for the show, and that can be the little push you need to keep going.

Your show is an exploration of British Nigerian Sisterhood, shining a light on what it means to exist in the space between two worlds- what inspired you to explore this particular topic further?

Being someone with dual nationalities creates several challenges that have been documented in various shows. A big one is when your cultures collide, and how you navigate it. I wanted to explore this from the perspective of two sisters because it allows audiences to experience two sides of the same family home, thus building a more complete picture of it. For instance, just because you’re in the same family doesn’t mean your experiences of your parents, or your knowledge about your family’s truth, are the same.

Added to that, being sisters, you can portray them having difficult conversations and being their worst selves, without a need to censor them in the way you might if the conversation was between friends or colleagues. That adds to the story because you can experience their unfiltered thoughts and feelings, and really get a sense of who they are and how they have come to be that way.

The show also explores other themes, like the experience of eating disorders by black women, something not typically seen in theatre, and clashes between culture and faith.Through doing this I hope to show the complexity of black womanhood and the factors that can influence how it might be shaped.

Your show was developed as part of the VAULT Festival New Writers Programme 2019, led by award-winning writer Camilla Whitehill and showcased during VAULT Festival 2019 in a sold-out show. How did you find taking part in the programme?

Taking part in that programme remains one of the best things I’ve ever done. For eight weeks, I got to live and breathe theatre. Every Saturday,we’d have a workshop led by Camilla and a guest she’d invited. Some of the people we got to meet and learn from includeLuke Barnes (All We Ever Wanted Was Everything, The Jumper Factory) and JonBrittain(Rotterdam, Margaret Thatcher Queen of Soho).

We also got to watch a huge amount of shows during VAULT Festival. This allowed me to dissect different theatre forms and the manyways a story can be told. It was incredibly helpful to be able to do this alongside writing as I could try out different forms and techniques I’d seen.

There’s a huge amount of talent at VAULT Festival, so I was luckyto have this experience so early on within my writing career. It’s given me a lot of confidence and a lot of ideas and is one of the reasons I’m so glad to be debuting She Is A Place Called Home there.

She Is A Place Called Home sees you collaborate with Layla Madanatwho directs and Tia Ray who has produced the show. How have you worked together to realise the show?

Layla and Tia are amazing.They have so much experience and I’ve enjoyed seeing the show through their eyes.Being the Director and Producer respectively, Layla and Tia’s roles are a bit more defined than mine, allowing me to bounce around and take care of whatever else needs doing.

It’s also been wonderful to see people doing things they love. Put Layla in a studio with a bunch of actors and she seamlessly knows how to connect with them,and how to put them at ease in order to coax the best performance out of them. Tia has gone above and beyond in identifying new partnerships for the show and I’m amazed at how easily she keeps track of the hundreds of people she’s involved with. I’ve learned so much from watching them in their element and have so much admiration for the time and energy they invest in their craft.

Yes!I don’t have any experience putting on a show, so this has been a steep learning curve. I’m grateful for it though as it’s given me a behind the scenes look at everything. It’s also made me appreciate just how much it takes to put on a production.

I’ve also been amazed that despite writing the play, there are still things about the characters or about the script that I didn’t even realise was there. So I look forward to seeing how other people interpret the show, and which themes stand out to them.

This is ashow about two people doing their best in very difficult, very complex situations. Sometimes they get things wrongor they don’t ask for help as much as they should. This is something I think we can all relate to. I hope audiences see this show, see these imperfect people and extend the same kindness and empathy they feel towards the characters, towards themselves.

1) Don’t be afraid to write badly. I remember this quote by Ira Glass which basically says how when you first start out in your field, your tasteis better than yourtalent. But the more you create,the better you get, and eventually that gap will close. But that can only happen if you aren’t afraid to produce work, a whole lot of work, that isn’t that great.

2) Find your cheerleaders.With social media, it’s so easy to compare yourself and how well you’re doing. Don’t. Comparison is the thief of joy and it will stifle allthe amazingness inside your head. Having people around you who can remind you of this is crucial.

3) Shoot your shot. If you see an opportunity, go for it, however far-fetched it might feel at the time because you just never know. Even if your piece isn’t selected, it still means that there’s someone else on this Earth that has read something you wrote, and that’s still a win.

She Is A Place Called Home will show from Tuesday 3rd until Sunday 8th March 2020 at this year’s Vault Festival. To find out more about the production, visit here…