Family for all of us takes on a very personal meaning, our view of the family construct differing from the next person. Drawing on her views of sisterhood, arguably one of the strongest familial bonds, writer Esohe Uwadiae presents She is a Place Called Home; a considered portrait of a bond tested by the expectations of their mother as well as their proud domineering father. 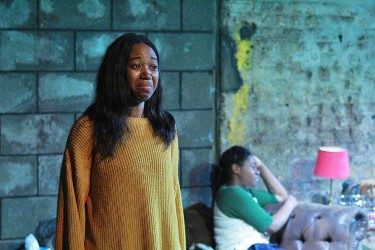 Watching She is a Place Called Home on International Women’s Day takes on a greater significance, there’s a quietly political underbelly of daily injustices and inequalities – whether overt or covert having a greater awareness placed on them, the day an amplifier for voices often sidelined. Nicole Acquah‘s and Jordan Noel‘s dynamic relationship puts into focus the complexity of sisterhood; one day you’re talking about the latest nightmarish Tinder date, to complaining about the day to day goings on at work or uni, to mum and dad always seeming to place judgement or having something to say, or witnessing the gradual journey of your sibling’s struggle with mental illness or drastic behavioural changes.

Uwadiae is able to pick up on these intricacies with precision, the show serving as a familial case study examining two British Nigerian young women, their interactions differing throughout the show’s progression, reminding us that that’s life – each day, each moment throwing up an unpredictability that we find ourselves having to figure out. The parental figures are never seen, only heard about via Sister 1 (Noel) and Sister 2 (Acquah), their mother expected to play the role of doting wife whilst their father is allowed to marry another woman, the show observing the two girls having to adapt to this notion and prepare for their father’s wedding.

Acquah and Noel are endearing storytellers, they not only give us their perspectives on one another as well as themselves, they illustrate the significance their parents have on their lives; their father incredibly competitive and only appearing to be there for them at their most important moments – graduation deemed a crucial event. A savvy businessman more concerned with securing a successful deal than gauging how his nearest and dearest are feeling, the weight of International Women’s Day continues to be felt as his male dominated views sideline those that should matter the most.

Uwadiae captures the taboo that still surrounds mental health issues within the African community, in this case, how an eating disorder impacts on both sisters, and how little attention is brought to this by both parents, who seem to feel that it’s something that can just be brushed over and will eventually disappear. The fact that both parents are never seen but only ever heard about emphasises the generational gap further, helping to heighten the distance felt by all. She is a Place Called Home is a thought provoking watch, showcasing the struggles, concerns, thoughts yet undeniable strong bond shared between two sisters trying to make sense of their current situation.

She is a Place Called Home was shown from Tuesday 3rd until Sunday 8th March at The Vaults as part of this year’s Vault Festival. To find out more about the production, visit here…