As industries flocked to the online world last year in response to the pandemic, particular trends began to emerge, the popularity of food and drink master classes being one of those. Tapping into this newfound trend, InHouse Theatre present Dark Spirits: Black Humor, a live-streamed cocktail class meets melodramatic classical one-man show. 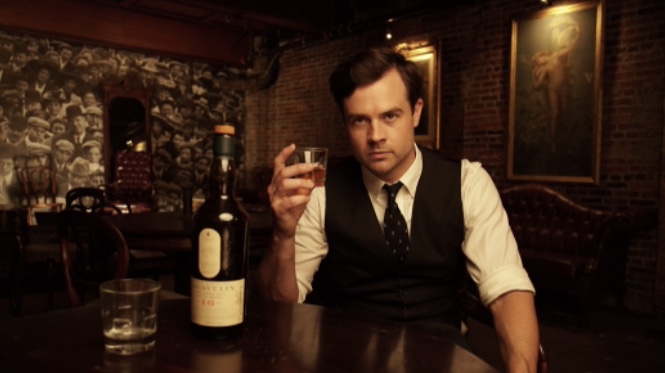 Written and performed by Mark Jude Sullivan, Dark Spirit stransports all to The Wolves Bar, California, Los Angeles. Accessible via Zoom or newly formed digital platform Showcatcher, we’re made to feel welcome, at home and invited to either bring a drink of choice or seek guidance from Sullivan’s charismatic bartender as he gives us a brief cocktail session and history lesson to go alongside it.

The Wolves Bar, inspired by artistic decor of the 1910s, is a quiet, elegant and sophisticated presence throughout, Sullivan subtly guiding us on a tour of the venue as he navigates his way through the evening. Dark Spirits celebrates storytelling in its purest form, Sullivan our storyteller, as if camp mates around a camp fire – as he delves into a tale of tragedy and loss, via the route of a production of Julius Caesar.

Channelling Shakespeare’s rich, dramatic text, Sullivan seeks inspiration – past memories feeding into a performance of Julius Caesar he’d previously taken part in, the show’s intensity, with the backstage drama of the cast added, mixed in with superstitions heightening Dark Sprits’ feeling of suspense. Sullivan meticulously observes the harshness of reality with his descriptive anecdotes and is able to fuse this with the metaphysical aspect of taking part in a production, these two aspects cleverly playing side by side, as we gain an introspective insight into Sullivan’s stage choices. The show’s filmic air a signature piece of the evening, making for an entertaining watch!

Dark Spirits: Black Humor is currently showing as part of this year’s Edinburgh Festival Fringe on 18th, 22nd, 25th and 29th August 2021. To find out more about the production, visit here…