Driven by the metaphorical symbol of Mount Nyriagongo, a volcano located in the Virunga National Park, Democratic Republic of the Congo, Benedict Lombe’s fiery production Lava vividly etches out the unpredictable, complex journey of the lead’s pursuit to gain UK citizenship. 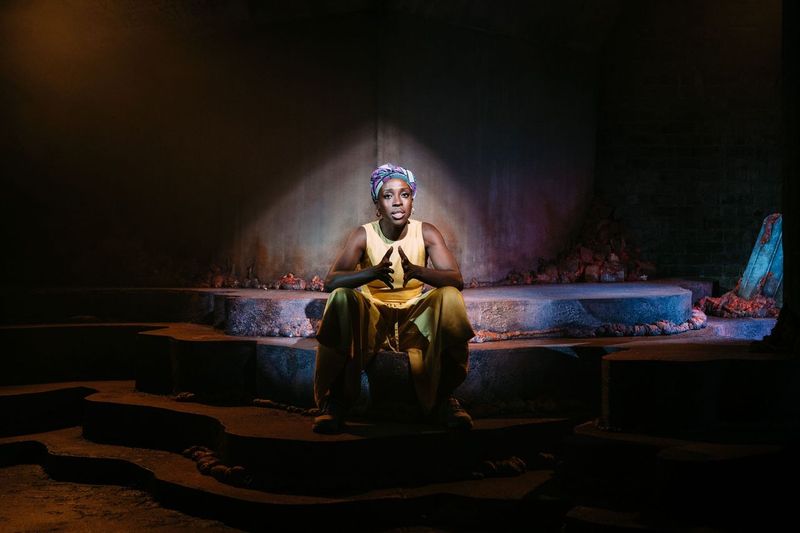 Watched via the Bush Theatre’s live streaming platform, Lava forms part of the venue’s Protest Series, a digital response to the murder of George Floyd a year on. The show a powerful response to this, a story of survival and resilience as Ronke Adékoluejo’s unnamed hero seeks to figure out her actual name, and why this hasn’t been featured on her South African passport.

Adékoluejo is fearless, able to grasp Lombe’s proud, poetic and defiant language and produce a stand out performance, a strong storyteller brave and open enough to tell us all of her traumatic past and how this has made her the young woman she is today. From her location of origin – the Democratic Republic of the Congo, to relocating to South Africa, Ireland, and finally England, Lombe’s script is a dynamic lesson in world history, from Mobutu’s Congo to post Apartheid South Africa and making reference to Shaka Zulu and the Born Frees – the show’s content is a treasure trove of information, cleverly written in such a way in that we hear about important time periods through the perspective of our lead, we see these events through her eyes and this is important.

Jasmine Swan’s awe inspired volcanic set design steals the show and establishes the show’s elemental aesthetic, a striking reminder of the show’s strong, earthy yet fiery sentiment. Anthony Simpson-Pike directs a bold production, the evening an engaging, thought provoking experience, a reminder that all of our voices are integral to history.

Lava is currently showing until Saturday 21st August 2021 online, to find out more about the production, visit here…