Artistic Director Barbara Mundel started her first season at the Kammerspiele a year ago, right in the middle of the Covid-19 pandemic, when all theatres were closed. Productions were postponed or, if possible, streamed online. But finally, Mundel was able to present her first premiere to a live audience, a play based on Gabriele Tergit’s novel Effingers, in an adaptation by director Jan Bosse and dramaturge Viola Hasselberg. First published in 1951, the novel was not a success, but it was reissued this year and has been well received by literary critics. 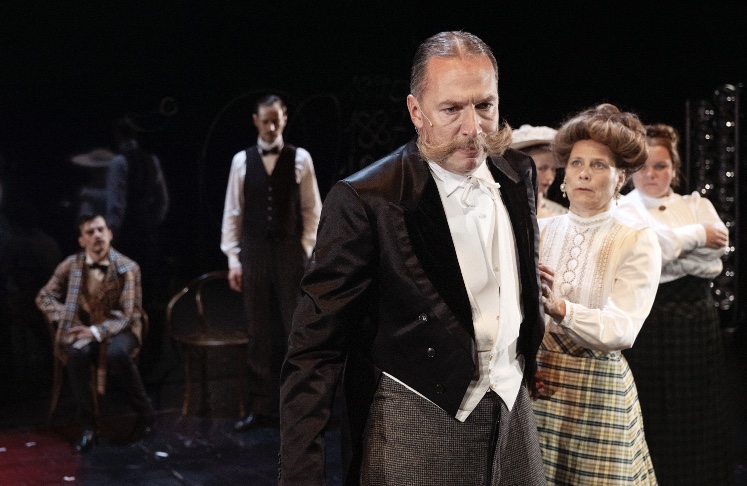 Court reporter and author Gabriele Tergit’s partly autobiographical novel about two Jewish families describes the rise and decline of a bourgeois world between 1870 and 1939, entailing the end of the German empire, the First World War, the Spanish flu, the formation of the Weimar Republic, and eventually, Nazi Germany.

The premiere was almost sold out and being seated in the auditorium felt like old times, except for the masks that everybody was obliged to wear in the theatre, and during the performance.

Like the novel, the play begins with a letter written by Paul Effinger (Christian Löber). While old family photographs and images of Berlin are projected onto a screen, Paul talks about his passion for screws. Having seen a bolt cutter in London, he is planning to introduce this innovation to Berlin. He strongly believes in progress and the rise of consumerism – screws that everybody can afford. His brother Karl (Bekim Latifi) considers him a dreamer, and Paul’s failing screw factory seems to prove him right, but soon Paul has a new project – the gas engine.

Banker Emanuel Oppner (Edmund Telgenkämper) has purchased a new house, although his wife Selma (Johanna Eiwroth) is opposed to leaving her modest home. She has always preferred the simple things in life. But Oppner feels he needs a home that will represent his new status, to help his daughters find suitable husbands. And soon the successful factory owner Karl Effinger marries the beautiful Annette (Anna Gesa Raija Lappe). Oppner’s house is the hub of the story that brings three families together – the Goldschmidts, Oppners, and the Effingers.

Lawyer Waldemar Goldschmidt (André Jung), who is barred from a professorship because he refuses to convert to Christianity, considers himself a Prussian and liberal patriot. A cynical yet observant commentator on the changes in society, he is in love with a beautiful singer (Lucy Wilke) but lets her marry someone else. His final speech at the end of the play is shattering.

The play covers many important and still relevant themes – the indecisiveness and insecurity of youth, the rise of socialism due to the dismal situation of the working class, women’s rights, anti-Semitism – not only in Germany but also represented by the Jewish refugees who fled from the Russian pogroms -, and the horrors of World War I. The undemocratic forces during the Weimar Republic are sadly comparable to undemocratic movements in various countries today. There is even a short scene when the advantages of batteries over combustion engines are discussed.

The play is divided into 40 chapters. The beginning is usually marked by a family photo, for which the actors assemble in front of the video screen. After the photo has been taken, they sit down on both sides of the stage. The story is narrated by different actors, who also comment on the characters who are actively involved in a scene. The characters often respond to the comments, which provides various comical moments.

The actors are excellent throughout, skilfully directed by Jan Bosse. Edmund Telgenkämper is outstanding as the patriarch Emanuel Oppner and the seemingly brilliant Martin Schröder, whose socialist dogma soon changes to something else. André Jung impresses as the wise and world-weary commentator Waldemar Goldschmidt. Zeynep Bozbay convinces as the ruined idealist Mayer who believed in the Gotthard Tunnel and the dedicated academic social worker Marianne Effinger, whose friendship to Martin Schröder is seriously tested. Lucy Wilke is lovely and ethereal as the charming singer Susanne Widerklee and Katharina Bach delights as the romantic Sofie who becomes a celebrated dancer.

This is a highly theatrical production using video projection (Ruth Stofer) to send actors and audience travelling back through time, but also employing theatrical devices to appeal to the imagination of the audience. The horseback-riding scene was particularly funny. Kathrin Plath’s elaborate costumes help the audience immerse themselves in a bygone era.

This is a very impressive production with an outstanding cast. It should not be missed.

Next performances of Effingers on Oct. 2nd and 3rd, 2021. For more info and tickets, click here…