Standing tall across the Neretva River, Old Bridge (Stari Most) – located in what was formerly known as Yugoslavia has overseen many a couple and passer by – two years younger than Shakespeare, the landmark having withstood the elements for centuries, making it of cultural and historical significance. Spanning from 1988 until 1992, Igor Memic‘s 2020 award winning Papatango New Writing Prize Old Bridge traces the mighty landmark’s final years before the the Croat-Bosniak war would see to its destruction, via the eyes of four residents. 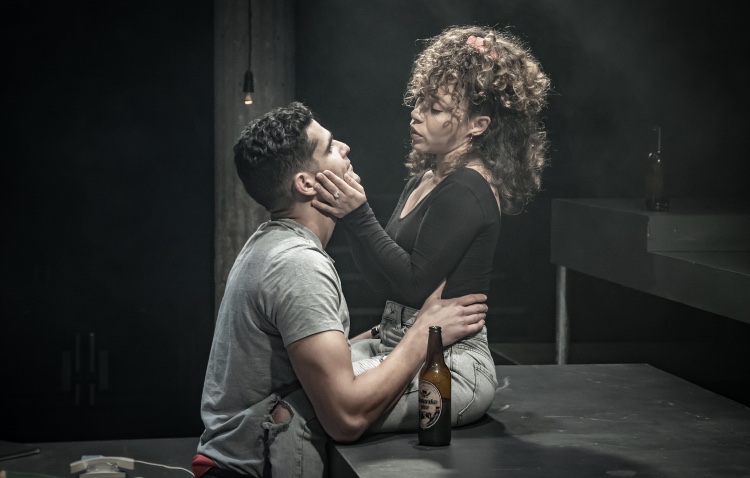 Zoning in on the lives of Mina (Saffron Coomber), Mili (Dino Kelly) Leila (Rosie Kray) and Sasha (Emilio Iannucci), Old Bridge ties the past, with the present – a heartbreaking tale of young love stricken by the ravages of tension and war, we observe Mina and Mili’s relationship, from playful beginnings, where Mili makes his presence known in a local diving contest located on Old Bridge to devastating circumstances that test the couple’s resilience – this the production’s sentimental through line. We’re reminded of what ties humanity together – love. No matter the hardships happening around us. The show’s metaphor of Old Bridge resonating not only a visual level – realised by Oli Townsend’s fascinating multi-platformed, black set, but as a symbol of endurance and hope – props placed across the various panels signalling the show’s locations, the ensemble inhabiting differing panels to break up, making for a wonderful aesthetic.

Memic writes a rich, compact piece scoping religion, cultural going’s on and Yugoslavia’s complex history which ultimately shapes the quartet’s current situation. The world around them slowly closing in around them and collapsing, the novelty of going to their local coffee shop, gradually becoming more of a luxury and distant memory than reality, which is weighty to accept. Coomber, Kelly, Kray and Iannucci are all the heart of the evening’s slow descent into chaos – Susan Lawson-Reynolds’ omniscient narrator a soulful, ethereal quality who powerfully makes her present known, weaving the evening’s action together and contributing an air of hope, faith and spirituality. Selma Dimitrijevic directs a gripping piece, an ambitious exploration of European history seldom seen on our stages, and a powerful introduction into this part of world history that I’m inspired to learn about further. I attend a relaxed version of the production, meaning house lights are faintly kept on and any loud sounds are omitted from the performance, making for a calmer experience. Old Bridge is a tale of survival and cultural identity, a recommended watch.

The Old Bridge is currently showing until Saturday 20th November 2021 at the Bush Theatre. To find out more about the production, visit here…