Am I A Robot? @ The Old Market (Brighton Fringe Festival 2022) Review

In 2016, the world’s first social humanoid robot named SOPHIA was activated, developed in Hong Kong, SOPHIA would go on to part take in various interviews across the globe, which as you can imagine caused further intrigue. Inspired by where we’re currently at within our fourth Industrial Revolution, K&A present Am I A Robot?, which forms part of Brighton Fringe’s Dutch Season. 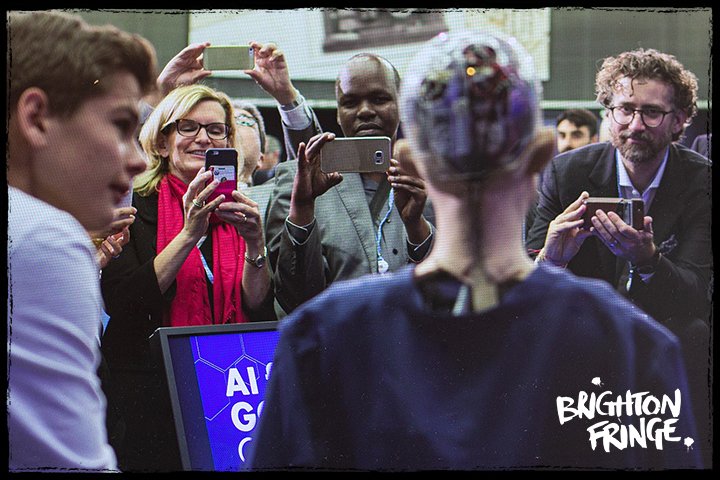 Part demo, part philosophical experience, humanoid SOPHIA takes to the floor – displaying her current cognitive capabilities, our host Alexandra Bellon anchors the experience, asking SOPHIA questions as well as opening up the forum for us also to ask and help form the show’s trajectory. In amongst the steady pauses as SOPHIA attempts to comprehend the questions being asked of her, this is a fascinating opportunity to experience the next level of A.I. and what this could mean for humanity moving forward. Watching performer Karla Isidorou take on SOPHIA’s distant, computational, logical being inspires thought – a computer built to mimic humanity at its beginnings – her lengthy, inauthentic, overly detailed answers create further intrigue.

We watch the process of deeper learning as SOPHIA, although not necessarily relatable, starts to learn who, to a point, she is and how she functions within the wider world. The fact that the conversation is opened up to us, a powerful part of the experience as it’s fascinating to hear what fellow audience members think and what they’d like to know. This didactic format working well to really capture the onset of what could be and the implications of this. Footage of the real SOPHIA being interviewed played both at the beginning and conclusion – watching her take on the challenge of answering questions from various outlets, peculiar. This sets the tone for both the show’s exploration of this new ground, and the new ground established in real time. Am I A Robot? a provocative forum, more so about fostering conversation than presenting a polished show and this is important in the world of theatre making.

Am I A Robot? was shown from Friday 27th to Sunday 29th May 2022 at The Old Market as part of this year’s Brighton Fringe Festival. To find out more about the production, visit here…