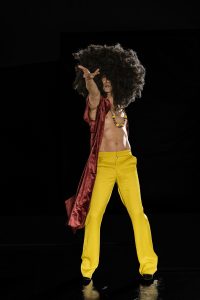 Currently, we’re breaking down exactly what intersectionality looks like and how this plays out in reality. Everyone with their very own unique set of experiences that continue to impact how they interact with the outside world. Delving into this further with solo performance Mix Race MixTape, Professor in Performing Arts at Stockholm University of the Arts John-Paul Zaccarini presents Mix Race, an exploration of the political and emotional minefield of intersectionality with poignancy. Ahead of its showing on 3rd February at Rich Mix as part of Certain Blacks Heroes Festival, John-Paul tells us more about creating the show, what it means to form part of Certain Blacks’ ninth festival and what audiences can expect!

Hi John-Paul, you’ll be performing Mix Race MixTape on 3rd Feb which forms Certain Blacks’ 9th festival titled ‘Heroes’ at Rich Mix. How are you feeling ahead of the production?

I’m excited to bring some fresh vibes to the show.

Mix Race MixTape is an exploration of the political and emotional minefield of intersectionality with poignancy. What inspired you to explore this topic further?

I work in 99.5% white, mostly hetero spaces. That comes with a certain smugness and unconscious privilege. I wanted to show those spaces that there are other bodies and perspectives that are either excluded, or else invited to the table but denied a voice. One way to do this was to do one queer thing, one black thing and one feminist thing every day. Every day. To put invisible privilege in the spotlight.

The production is a mixture of stand up, hip hop and spoken word. How have you approached creating the show?

I wrote the show quick. Years of silencing myself – or silencing the brown, the working class, the queer – in meeting rooms and boards and committees, made an incredibly rich and complex brew of language bubbling in my guts. I wasn’t bringing all of me to the party. I would invite friends and family for dinner and then perform the poems as they came, to test if I actually had the nerve to deliver them in public.

Certain Blacks are renowned for supporting marginalised artists and giving performers the platform to showcase their work. What does it mean to form their ninth year?

I’ve been wanting to work with Certain Blacks for a long time. I have my own initiative FutureBrownSpace which works with creating nurturing environments for BIPOC without the pressure of the so-called “white gaze”, and so I’m hoping this is the first in a series of collaborations.

That if I make it personal and not make general statements about intersectionality, as an academic would, then I can allow the audience to feel something rather than just think about something.

They can expect both humour and some well-honed spoken word laced with theory. I’m a little bit Elephant and Castle, a little bit public school, buff brainy and bitchy – a triple threat.

I would like them to consider how easy it is for some of them to move through the world without interruption, while some others have a hard time just getting from A to B without being questioned, asked to justify themselves or without having their dignity taken away from them. I would like it if those that think that “identity politics” is either over or never was a serious claim, took a look at how they may not, in that case, have an identity, or a community, because their universality and access to everything has always been an unspoken assumption. When do we ever speak of a “white” community in any positive sort of sense. Yes, white people do have a white identity, and maybe that’s why some continually disparage identity politics. After all, we don’t have white visual artists, male pop stars or fully-abled architects, but do we have female athletes, black filmmakers and queer poets.

Mix Race MixTape will perform as part of this year’s Certain Blacks ‘Heroes’ Festival on Friday 3rd February 2023. To find out more about the show, visit here…