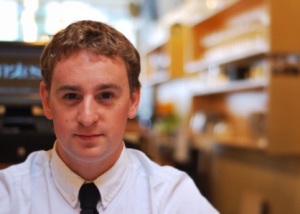 Hi Arron! You’ll be set to star in Beta Testing at the Udderbelly Festival at the end of May, which will be performed by the circus company, Circus Geeks which you founded. How are you feeling ahead of the show?

We’re really looking forward to getting stuck in with our run at the Udderbelly, we’ve been touring the show across the UK so it will be nice to perform in London. Get to know the space and settle into a routine.

Could you explain what the show is about?

It’s about juggling and jugglers. Looking at some of the inherent drama that is built into juggling, the science behind it, and lifting the lid on life as a juggler. Ever wondered what goes into being a professional performer, marvelled at how tricks are learnt or wanted an insight into life on the road.

Beta Testing consists of a small cast of 3, what inspired this decision?

Jon, Matt and myself met at a juggling convention (imagine a sports hall crammed full of people repeatedly throwing, catching and often dropping) when we were teenagers. Since then it’s always been at the back of mind mind that it would be fun to make a show together.

Could you explain the rehearsal process? How much input do all 3 performers have in terms of devising the project?

Beta Testing has had around 10 weeks of devising. Many of the scenes derive direcy from our blog’s most popular posts, which I then fleshed out. Matt and Jon helped to physicalise the scenes, add new aspects and improve on the ideas. We all try to speak directly to the audience about life as jugglers in a new take on circus, combining technology with live performance.

What inspired the creation of Beta Testing?

Our love for juggling.

The Udderbelly is renowned for championing new works within the circus arts, what makes Circus Geeks unique?

Circus Geeks started out as a blog for circus artists. We’ve evolved into a company making live shows for the public but our original respect for our art form remains. We want to make shows which entertain without compromising on content.

Beta Testing was developed in collaboaration with a number of reputable arts venues and organisations, from the National Centre For Circus Arts to The Roundhouse Theatre. Is this an approach used with the creation of all Circus Geek Shows. Beta Testing is currently supported by the Jerwood Charitable Foundation and the National Lottery. How has this funding allowed for Circus Geeks to achieve their ambitions?

We were really lucky to be awarded the Propellor Prize, which brought so much support for Beta Testing from so many places. It was great to be able to create in a situation where we didn’t have to rush the process too much, we could throw ideas out and follow new ideas that popped up along the way. We don’t have a cookie cutter approach to making shows, it’s still early days for us, but sitting down to write with a good coffee is always a good start.

Circus Geeks initially started off as a blog, introducing shows as popularity increased. How important is blogging to the Circus Geeks brand?
I’m not sure it’s important as a marketing tool, that’s not why blogging is interesting to us. Although I’m sure it doesn’t hurt that side of things. Blogging is important because it gives us a chance to sit down and reflect. A chance to explore and a chance to receive feedback or suggestions. It’s a tool that helps discipline random ideas, collect and build a resource which we can come back to later on. Blogging is also a lot of fun.

What advice would you give to aspiring circus performers?

Watch as many live shows as you can, use the internet to inform you and train hard. And have fun!

Beta Testing is currently showing at the Udderbelly until Sunday 21st June. For more information on the production, visit here…

Circus Geeks is what they call themselves – three jugglers who combine their skills to create an entertaining yet innovative show. What is juggling? In a very matter-of-fact way it is throwing objects in the air and catching them. However when you put it like that it sounds quite bizarre that someone would want to dedicate their lives to perfecting such a skill, spending hours and hours throwing and catching and dropping and catching.