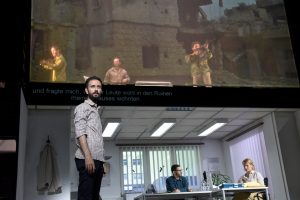 END_OF_DOCUMENT_TOKEN_TO_BE_REPLACED

Overshadowed and rarely discussed historically, Minefield examines the personal lives of some Falkland War veterans and their willingness to reflect and share some rather visual events of their past to a viewing audience. One can only imagine the journey these young men (at the time of war) must have had to deal with, digging into the psychological and even haunting effects of the battlefield.